Everyone at our practice is committed to providing you with the very best in pet healthcare. Our veterinary team bring a wealth of experience to the practice and have individually obtained high standards of professional qualification.

Kieran Doyle
MVB MRCVS
Kieran, a local from Killowen, graduated from UCD in Dublin in 1996. He worked in mixed animal practice in Castlewellan for 2 years. He then travelled to Australia and New Zealand, where he worked for 6 months. He returned home in 1999 to work in this practice, eventually buying it over and renaming it Clanrye Veterinary Clinic.

Brian Doyle
BVM&S MRCVS
Brian graduated from Edinburgh University in 2000. He then worked in mixed practice in Fermanagh before returning to Newry . He became practice partner with his brother Kieran in 2005.

Caitlin McAnulty
BVM&S MRCVS
Caitlin is from the Northeast of Scotland and graduated from Edinburgh in 2013. She has experience in a farm and small animal practice and spent time working in the Northwest of Ireland. She also has a keen interest in small animal medicine cases and geriatric cats. Outside of work she likes to explore the outdoors and the beech with her 2 rescue dogs Penny and Maisie. 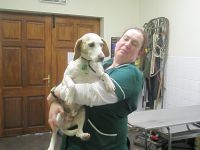 Michelle Megaw
CertVNECC RVN
Michelle became a qualified nurse in 1999 and joined our team in february 2012. She has previously worked in a busy referral clinic in Belfast and a dedicated out of hours emergency clinic where she obtained her emergency and critical care certificate in 2011. She enjoys all aspects of vet nursing, especially running nurse clinics in the practice. When not working, Michelle is kept busy by her two young children, her rescue dog Bella, and her 7 cats. She still finds time to enjoy doing some pet sitting.

Nial Martin
RVN
Niall graduated from DKIT in 2011. He has experience in nursing with both large and small animals. He has a keen interest in surgical nursing, especially in the areas of anaesthesia and dentistry. outside of work he loves the outdoors, running and road cycling. 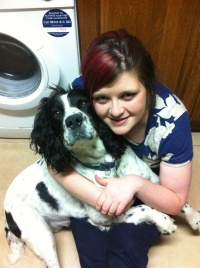 Hanna Skillen
RVN
Hannah is our student Veterinary nurse and has been with us since 2014! She is currently in her final year at Greenmount college and studying hard for important exams. She has always had a love for animals and a keen interest when it comes to nursing patients back to health. Hannah has various animals but is especially close to her beloved Springer Spaniels!

Karen Carlisle
Practice Manager
Karen has been part of Clanrye Veterinary Clinic since 1999, so is well known by our clients! Karen takes on many roles within the practice, from answering the phones at reception to stock ordering and accounts. She is a busy mother of two girls so always has her hands full! when she gets free time she is often found at the gym or out for a run.

Eva Murphy
Reception
Eva joined Clanrye in january 2012. She deals with both large and small animal clients. When not working, Eva likes attending the gym and is kept busy by her two children.

We offer a 24 hour farm animal service to the South Down / South Armagh region ...

Our service operates on the same phone number 24 hours a day 365 days a year. Out of office hours a recording provides the number of the duty vet for you to call directly. If you need us call ...